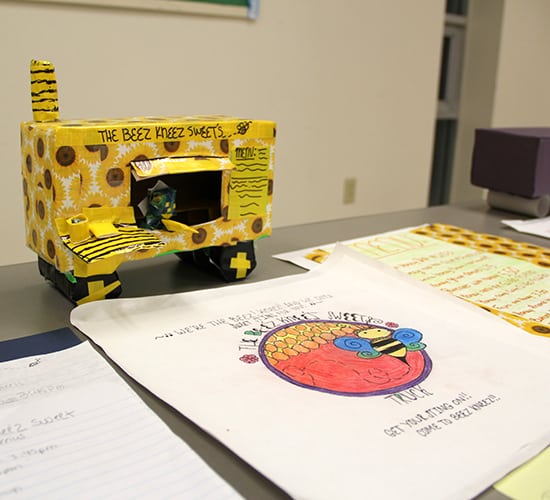 Students at the Methodist Children’s Home (MCH) charter school were recently challenged to show their creativity and mind for business during a recent class project. Angie Hammond’s food science classes participated in the project which involved groups of juniors and seniors developing their own food truck businesses.

The charter school, located on the Waco campus of MCH, is operated in partnership with the University of Texas-University Charter School system. Hammond, a teacher at the charter school for 13 years, came up with the idea for the project after watching a show on The Food Channel.

“I wanted them to learn what was involved in starting a food truck business and how to put together a proposal to present to a committee in the city where they want to set up your business,” Hammond said. “They also had to come up with a menu that would work for their truck, along with marketing slogans, jingles and models.”

The students were graded on the different aspects of their food truck project including their ideas for business structure, miniature truck models, menu items, design, and marketing ideas. They were also asked to make an item from their menu and bring to class. Students could work as part of a group or individually.

“I was very impressed with the thought and creativity that went into each individual or group project,” Hammond said. “The groups worked together very well and the individuals also did an excellent job. They all said that they liked the project.”

Staff and students voted on the projects and winners were announced during the school awards ceremony on May 18. Winners were: 1st Place: The Beez Kneez Sweets; 2nd Place: Koi Lantern; 3rd Place: Mobile Munchies.

“I found this project to be an inspiration and it brought our group closer together,” said Nikki, 18, a member of The Beez Kneez group. “It was a really fun project that brought out our creativity.”

Hammond said as part of her food science class, students also learned about taste test panels where the class conducted their own panel. She said they also compared fat-free foods to regular foods, and gluten free with regular foods. Hammond said she plans to include the food truck project in her curriculum next year and hopes to also add a field trip to local food trucks as part of the lesson.