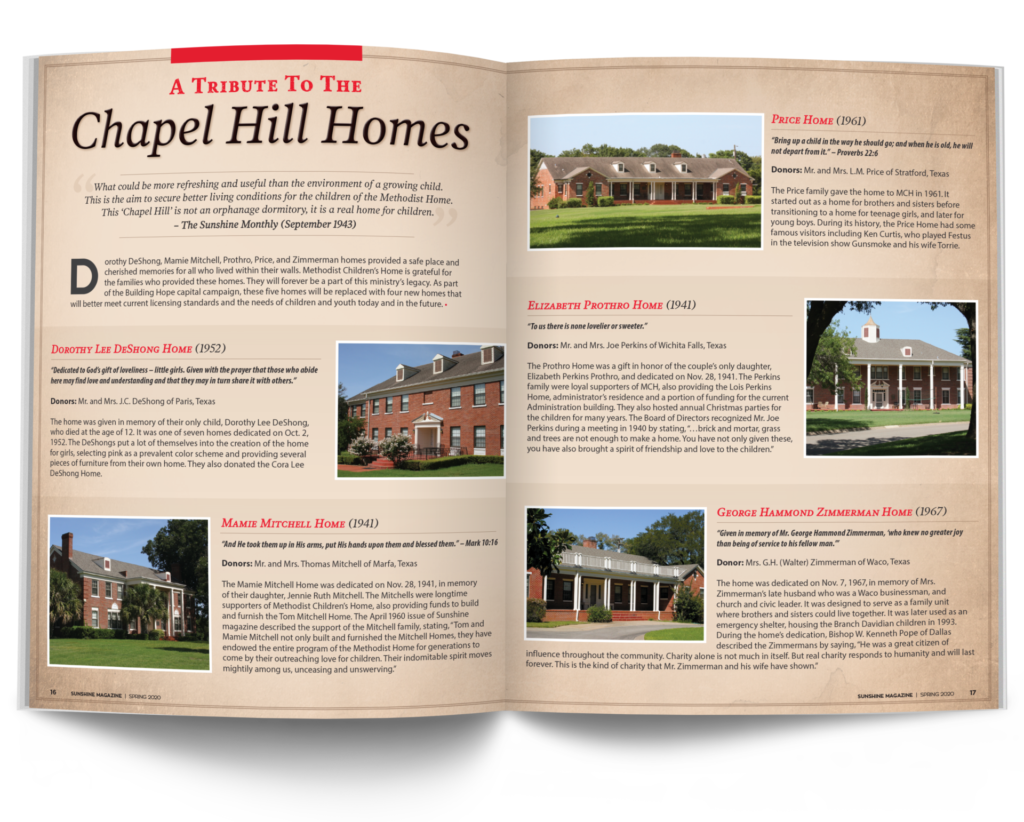 What could be more refreshing and useful than the environment of a growing child.
This is the aim to secure better living conditions for the children of the Methodist Home.
This ‘Chapel Hill’ is not an orphanage dormitory, it is a real home for children.

Dorothy DeShong, Mamie Mitchell, Prothro, Price, and Zimmerman homes provided a safe place and cherished memories for all who lived within their walls. Methodist Children’s Home is grateful for the families who provided these homes. They will forever be a part of this ministry’s legacy. As part of the Building Hope capital campaign, these five homes will be replaced with four new homes that will better meet current licensing standards and the needs of children and youth today and in the future.

“Dedicated to God’s gift of loveliness – little girls. Given with the prayer that those who abide here may find love and understanding and that they may in turn share it with others.”

The home was given in memory of their only child, Dorothy Lee DeShong, who died at the age of 12. It was one of seven homes dedicated on Oct. 2, 1952. The DeShongs put a lot of themselves into the creation of the home for girls, selecting pink as a prevalent color scheme and providing several pieces of furniture from their own home. They also donated the Cora Lee DeShong Home.

The Mamie Mitchell Home was dedicated on Nov. 28, 1941, in memory of their daughter, Jennie Ruth Mitchell. The Mitchells were longtime supporters of Methodist Children’s Home, also providing funds to build and furnish the Tom Mitchell Home. The April 1960 issue of Sunshine magazine described the support of the Mitchell family, stating, “Tom and Mamie Mitchell not only built and furnished the Mitchell Homes, they have endowed the entire program of the Methodist Home for generations to come by their outreaching love for children. Their indomitable spirit moves mightily among us, unceasing and unswerving.”

The Price family gave the home to MCH in 1961. It started out as a home for brothers and sisters before transitioning to a home for teenage girls, and later for young boys. During its history, the Price Home had some famous visitors including Ken Curtis, who played Festus in the television show Gunsmoke and his wife Torrie.

“To us there is none lovelier or sweeter.”

The Prothro Home was a gift in honor of the couple’s only daughter, Elizabeth Perkins Prothro, and dedicated on Nov. 28, 1941. The Perkins family were loyal supporters of MCH, also providing the Lois Perkins Home, administrator’s residence and a portion of funding for the current Administration building. They also hosted annual Christmas parties for the children for many years. The Board of Directors recognized Mr. Joe Perkins during a meeting in 1940 by stating, “…brick and mortar, grass and trees are not enough to make a home. You have not only given these, you have also brought a spirit of friendship and love to the children.”

“Given in memory of Mr. George Hammond Zimmerman, ‘who knew no greater joy than being of service to his fellow man.’”

The home was dedicated on Nov. 7, 1967, in memory of Mrs. Zimmerman’s late husband who was a Waco businessman, and church and civic leader. It was designed to serve as a family unit where brothers and sisters could live together. It was later used as an emergency shelter, housing the Branch Davidian children in 1993. During the home’s dedication, Bishop W. Kenneth Pope of Dallas described the Zimmermans by saying, “He was a great citizen of influence throughout the community. Charity alone is not much in itself. But real charity responds to humanity and will last forever. This is the kind of charity that Mr. Zimmerman and his wife have shown.”