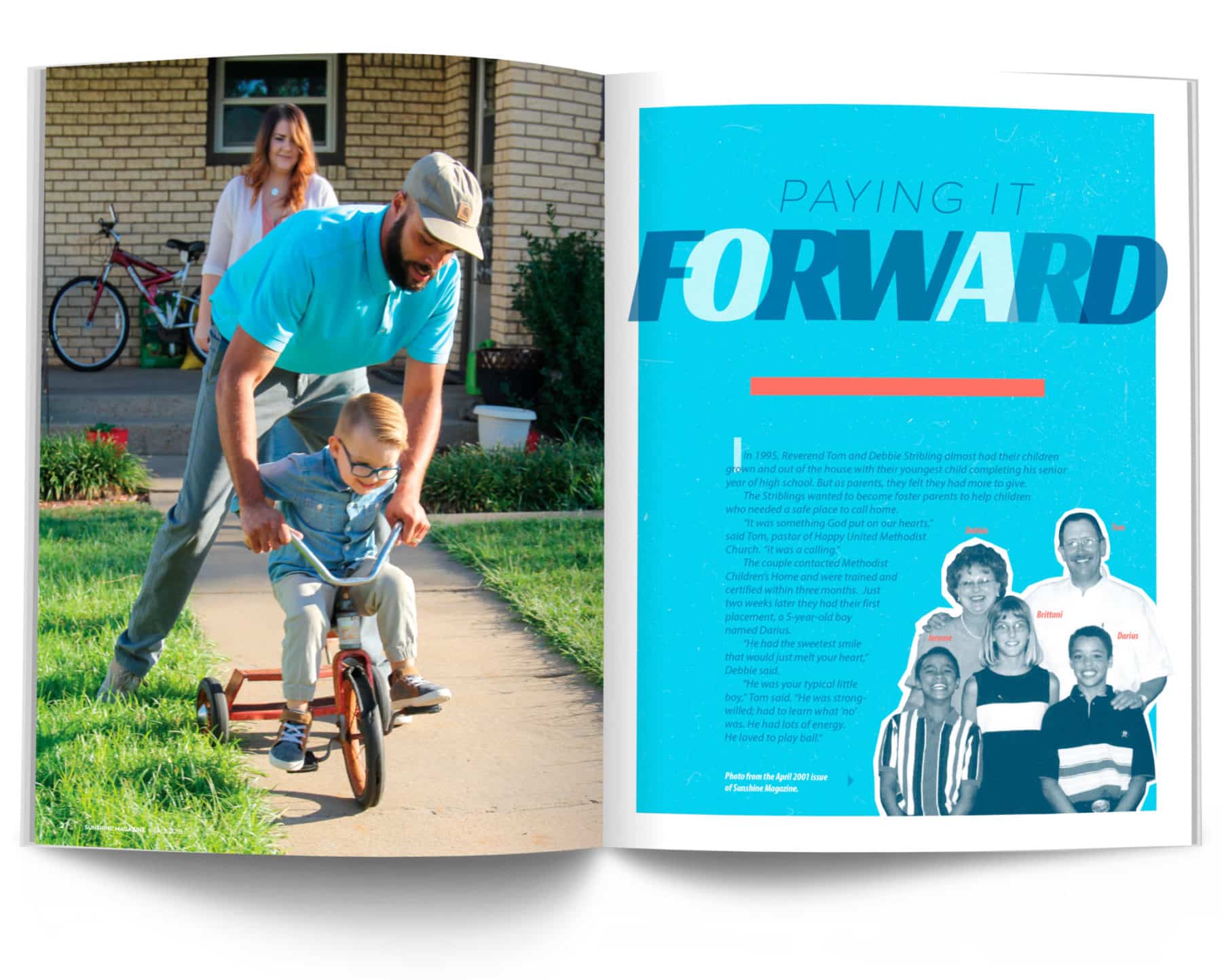 In 1995, Reverend Tom and Debbie Stribling almost had their children grown and out of the house with their youngest child completing his senior year of high school. But as parents, they felt they had more to give.

The Striblings wanted to become foster parents to help children who needed a safe place to call home.

“It was something God put on our hearts,” said Tom, pastor of Happy United Methodist Church. “It was a calling.”

The couple contacted Methodist Children’s Home and were trained and certified within three months. Just two weeks later they had their first placement, a 5-year-old boy named Darius.

“He had the sweetest smile that would just melt your heart,” Debbie said.

“He was your typical little boy,” Tom said. “He was strong-willed; had to learn what ‘no’ was. He had lots of energy. He loved to play ball.”

Several months later, Darius’ older sister Brittani joined her brother in the Striblings’ home. A few months after that, the Striblings welcomed another foster child, Jerome, into their home.

“I suppose you could say we all learned the ins and outs of foster care together,” Smith said. “From the start they were committed to the children placed in their home and they were mature enough to ask for support when they needed it.”

Darius, Brittani and Jerome remained with the Striblings throughout their childhood. Darius graduated from high school in Happy, Texas, and later met his wife, Calissa. Tom officiated their wedding.

The couple now lives in Amarillo where Darius started a woodworking business and manages an equestrian center. He visits the Striblings with his family frequently and feels grateful for their support throughout the years.

“I loved it there,” Darius said. “They taught me unconditional love that I never had before.”

When Darius and Calissa were ready to start a family of their own, Calissa discovered she had a medical condition that would make it difficult for her to become pregnant.

The couple considered adopting, “but with Darius coming from foster care, we thought we should give it a try first,” Calissa said. “And here we are.”

Darius and Calissa went through training to become foster parents through Child Protective Services. The process of becoming a foster parent showed Darius the other side, and brought up some tough memories from his childhood related to his biological mother. Although Darius and Brittani were raised by the Striblings, their mother had a presence in their lives. Their home visits with her could sometimes be tumultuous for the children.

Although the Striblings felt honored that Darius wanted to follow in their footsteps, they also worried about the emotions their son might face.

“We were excited,” Debbie said. “It was very heartwarming, but the other side is that you knew he was going to go through a lot of disappointment. The training requires you to face your prior life, including things that we knew about but that he might not know. But we knew his faith would get him through.”

Darius and Calissa started out by fostering two little girls who then went to a different placement. Next they received Carsen, now 4, who they adopted in June 2018. They also fostered Carsen’s siblings for a short time before they were adopted by another family. They are currently fostering a little girl, 18 months old, and hope they can help more children, like Darius was helped by the Striblings.

“I had a loving life,” Darius said. “Lots of opportunities. They showed me what family is all about. That’s important. They never gave up on me and I couldn’t imagine giving up on the kids that we have. I want them to have the opportunities that my parents gave me. I’m hoping we can give that to Carsen and show him what family is all about – how a dad is supposed to be to his wife, to his kids.”

“I couldn’t be prouder,” Debbie said of the man Darius has become. “Everything we prayed that he would overcome, he has.”

“That was the hope,” Tom agreed. “The whole driving force.”

Smith has felt privileged to be able to walk alongside the family throughout their journey over the years.

“Seeing Darius grow into such a loving and committed husband and father affirms the example the Striblings provided,” Smith said.

Through MCH Family Outreach programs, staff work with families to give them skills and tools to become successful and to reverse negative cycles of neglect or abuse. Smith said the goal in foster care cases, initially, is to give the child felt safety and a sense of normalcy.

“If along the way we can make an impact and help a young person learn safe and nurturing behaviors, alternative methods of response and provide healthy life skills, then yes, we hope to change the trajectory of that child’s – that family’s – existence, “ Smith said.

“I believe that by helping Darius maintain a relationship with his sibling and mother, providing opportunities for relationship with a family trained and willing to meet his needs, and supporting everyone’s growth along the way, he was given new opportunities and choices about how he wanted to lead his life,” she said. “It is certainly a credit to Darius that he is making positive choices and seizing healthy opportunities.” 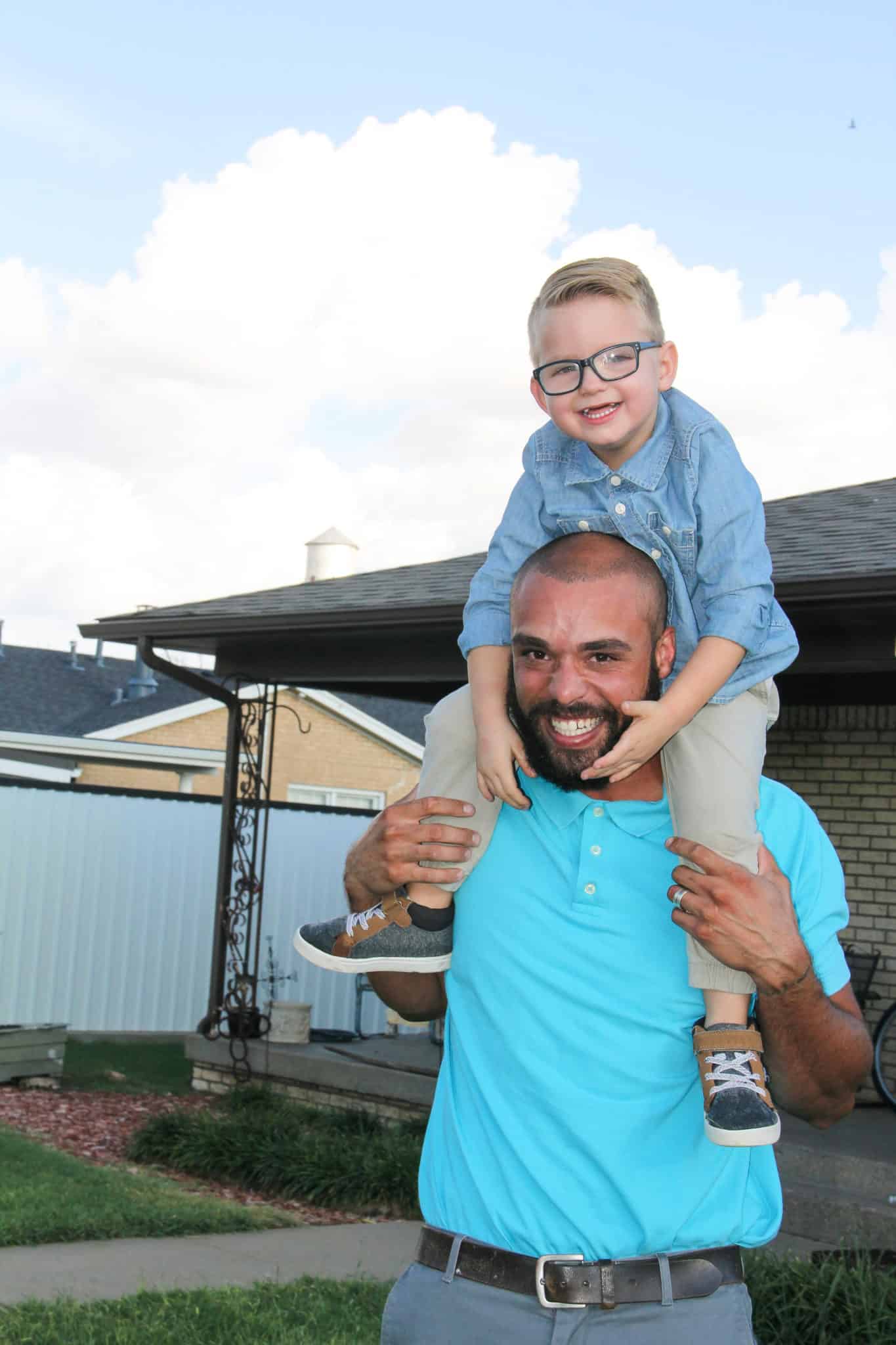 MCH makes an effort to reach children and families through early intervention and prevention services. MCH currently offers in-home services for families, grandparents or other caregivers raising children as well as parent education through 13 MCH Family Outreach offices across Texas and New Mexico. Services are provided at no cost to families. Foster care is offered in Abilene, Dallas, Houston, San Antonio, and Tyler.

“MCH has been intentional in funding and providing staff support for prevention and early intervention services,” Smith said. “In the Child Placing Agency community, those efforts are not always on the forefront. In our prevention and early intervention services, and in some foster care placements as well, MCH staff have the opportunity to work with the entire family and its support system to effect better long-term outcomes.”

Through the latest research on the impact of trauma on children and through partnership between MCH and the Karyn Purvis Institute of Child Development, MCH has developed programs that are reducing the risk of trauma for children who are vulnerable, said Moe Dozier, vice president for programs at MCH.

“With our programs, we are working to give people the skills to become more successful, but behind that is also about preventing childhood trauma,” Dozier said. “We want to prevent trauma in order to give them a better quality of life.”

Dozier said MCH hopes to positively impact families so their children can turn their lives around, just as Darius was able to do with guidance from the Striblings.

“To reverse the cycle, we must first stop the cycle,” Dozier said. “We do this through showing parents healthy ways to raise their children and giving them the skills that they can pass on to their children. Darius was able to learn parenting from his foster parents, and in turn he is impacting the lives of Carsen and other foster children. It was more than just reversing the cycle. They created a new cycle, and are paying it forward.” •

Click below to learn more about our MCH Family Outreach programs.