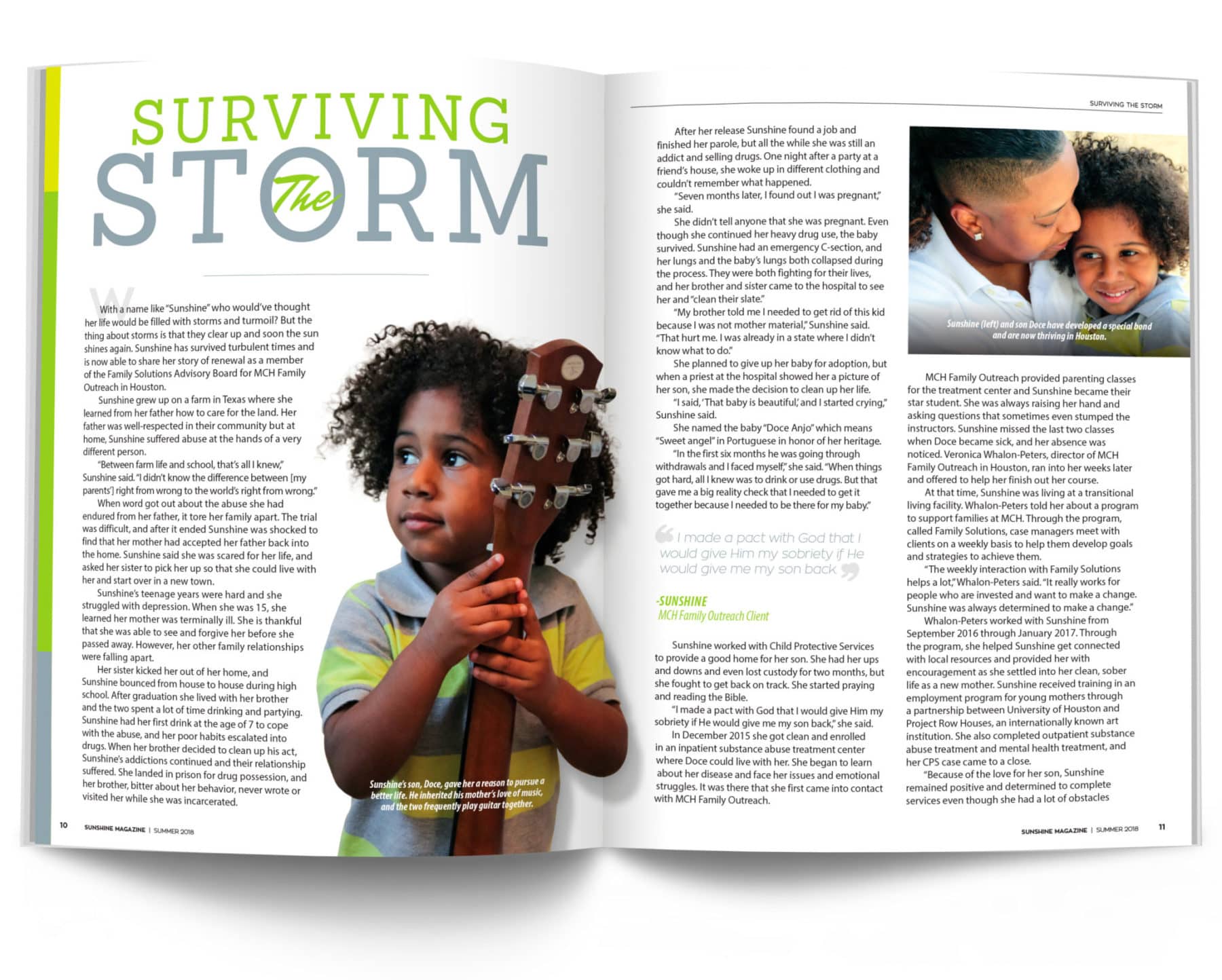 With a name like “Sunshine” who would’ve thought her life would be filled with storms and turmoil? But the thing about storms is that they clear up and soon the sun shines again. Sunshine has survived turbulent times and is now able to share her story of renewal as a member of the Family Solutions Advisory Board for MCH Family Outreach in Houston.

Sunshine grew up on a farm in Texas where she learned from her father how to care for the land. Her father was well-respected in their community but at home, Sunshine suffered abuse at the hands of a very different person.

When word got out about the abuse she had endured from her father, it tore her family apart. The trial was difficult, and after it ended Sunshine was shocked to find that her mother had accepted her father back into the home. Sunshine said she was scared for her life, and asked her sister to pick her up so that she could live with her and start over in a new town.

Sunshine’s teenage years were hard and she struggled with depression. When she was 15, she learned her mother was terminally ill. She is thankful that she was able to see and forgive her before she passed away. However, her other family relationships were falling apart.

Her sister kicked her out of her home, and Sunshine bounced from house to house during high school. After graduation she lived with her brother and the two spent a lot of time drinking and partying. Sunshine had her first drink at the age of 7 to cope with the abuse, and her poor habits escalated into drugs. When her brother decided to clean up his act, Sunshine’s addictions continued and their relationship suffered. She landed in prison for drug possession, and her brother, bitter about her behavior, never wrote or visited her while she was incarcerated.

After her release Sunshine found a job and finished her parole, but all the while she was still an addict and selling drugs. One night after a party at a friend’s house, she woke up in different clothing and couldn’t remember what happened.

“Seven months later, I found out I was pregnant,” she said.

She didn’t tell anyone that she was pregnant. Even though she continued her heavy drug use, the baby survived. Sunshine had an emergency C-section, and her lungs and the baby’s lungs both collapsed during the process. They were both fighting for their lives, and her brother and sister came to the hospital to see her and “clean their slate.”

“My brother told me I needed to get rid of this kid because I was not mother material,” Sunshine said. “That hurt me. I was already in a state where I didn’t know what to do.”

She planned to give up her baby for adoption, but when a priest at the hospital showed her a picture of her son, she made the decision to clean up her life.

“I said, ‘That baby is beautiful,’ and I started crying,” Sunshine said.

She named the baby “Doce Anjo” which means “Sweet angel” in Portuguese in honor of her heritage. 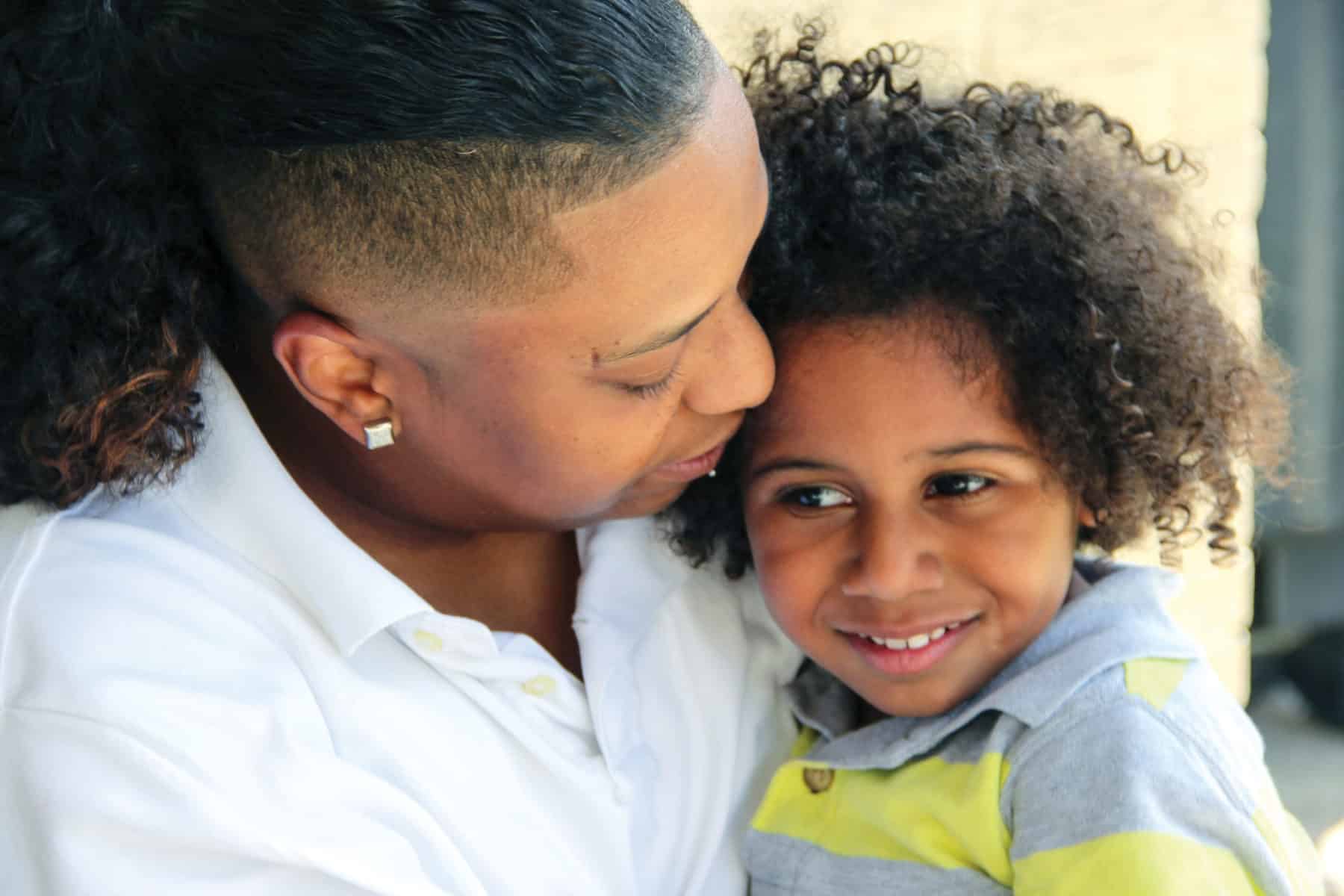 “In the first six months he was going through withdrawals and I faced myself,” she said. “When things got hard, all I knew was to drink or use drugs. But that gave me a big reality check that I needed to get it together because I needed to be there for my baby.”

Sunshine worked with Child Protective Services to provide a good home for her son. She had her ups and downs and even lost custody for two months, but she fought to get back on track. She started praying and reading the Bible.

“I made a pact with God that I would give Him my sobriety if He would give me my son back,” she said.

In December 2015 she got clean and enrolled in an inpatient substance abuse treatment center where Doce could live with her. She began to learn about her disease and face her issues and emotional struggles. It was there that she first came into contact with MCH Family Outreach.

MCH Family Outreach provided parenting classes for the treatment center and Sunshine became their star student. She was always raising her hand and asking questions that sometimes even stumped the instructors. Sunshine missed the last two classes when Doce became sick, and her absence was noticed. Veronica Whalon-Peters, director of MCH Family Outreach in Houston, ran into her weeks later and offered to help her finish out her course.

At that time, Sunshine was living at a transitional living facility. Whalon-Peters told her about a program to support families at MCH. Through the program, called Family Solutions, case managers meet with clients on a weekly basis to help them develop goals and strategies to achieve them.

“The weekly interaction with Family Solutions helps a lot,” Whalon-Peters said. “It really works for people who are invested and want to make a change. Sunshine was always determined to make a change.”

Whalon-Peters worked with Sunshine from September 2016 through January 2017. Through the program, she helped Sunshine get connected with local resources and provided her with encouragement as she settled into her clean, sober life as a new mother. Sunshine received training in an employment program for young mothers through a partnership between University of Houston and Project Row Houses, an internationally known art institution. She also completed outpatient substance abuse treatment and mental health treatment, and her CPS case came to a close.

“Because of the love for her son, Sunshine remained positive and determined to complete services even though she had a lot of obstacles stacked against her,” Whalon-Peters said. “Due to her great attitude, she had a lot of people in her corner advocating for her and supporting her.”

Sunshine expressed appreciation for the support she found through MCH Family Outreach.

“They saw something different in me. They stuck with me,” she said.

Sunshine and Doce, now 3, have their own apartment in Houston and are living a stable and happy life. The love between the two is special, and Sunshine is working hard every day to be a good mother for her son.

“It’s been hard to not just throw everything away, because that’s what I’ve been used to,” she said. “But I have a better support system now that I can call and they walk me out of it.”

Sunshine has built a strong network and become a known advocate in her neighborhood. She is a community liaison and researcher conducting a community needs assessment for residents and is also an ambassador for Project Row Houses. She has also returned to the treatment center as chair of a Narcotic Anonymous (NA) group and spoken about her disease several times.

“I feel like this is my life’s purpose,” she said. “When I was a kid, I wanted to change the world. I found out that being in this neighborhood, I’ve changed more people’s lives. In NA we call it giving back. I was a big dope dealer and I feel bad for that. This is a way for my redemption. It makes me feel good doing service work and giving back to people in this community who need help.”

Although Sunshine’s case has been closed with MCH Family Outreach for more than a year, Whalon-Peters said she still hears from her regularly, mostly to get advice about how to help other people. Because of her success and desire to help others, Whalon-Peters asked Sunshine to become part of the Family Solutions Advisory Board for the Houston office. The board consists of community members and like-minded agencies who meet to network and discuss new and better ways to help families.

Traci Wagner, program administrator for the Eastern region of MCH Family Outreach, said advisory boards first began when Family Solutions was implemented at MCH in 2012 and have recently grown to include all outreach programs. Outreach offices build relationships with community partners through collaborations, marketing efforts and memberships in local coalitions serving children and families.

“These working relationships not only serve to facilitate referrals and service collaboration, but they also give information and insight about life within the community and the daily experiences of families,” Wagner said. “They are an invaluable part of our work and help us continue to stretch and grow in offering hope to children, youth and families in our 13 areas.”

“She’s been a wonderful advocate for the program,” Whalon-Peters said. “When she was in the program, it was really just about getting her connected to resources in the community and empowering her to make those lasting changes in her life to improve her situation. She is an example of paying it forward by the way she is helping other people.”

Although she knows she will still face challenges, Sunshine is more confident in her ability to persevere and give her son a good life.

“I’ve got to do everything right to be a great role model for him,” she said. “I know how strong I am now.” •