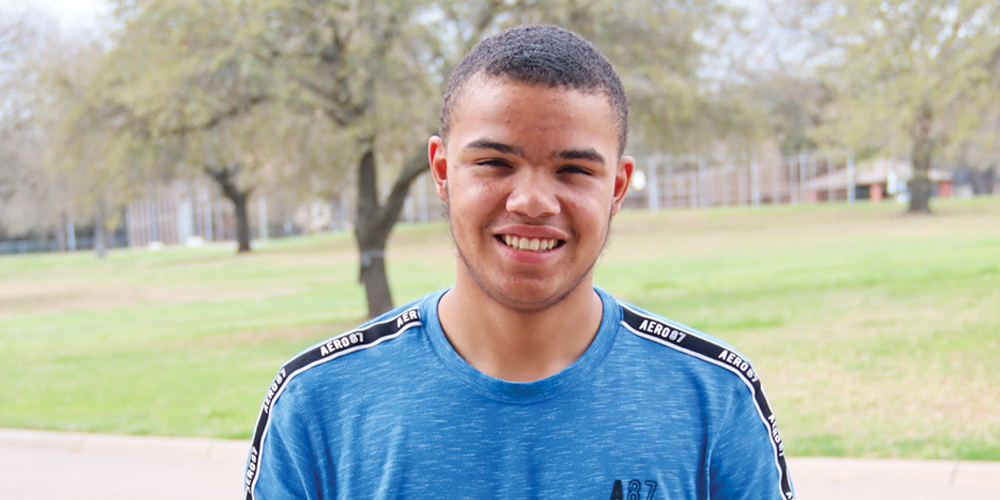 Devin came to Methodist Children’s Home when he was 13. Today he is a junior at the MCH charter school and says MCH has helped him discover identity and purpose.

“I lost my motivation and started having problems at school and at home,” Devin said, explaining what led him to be placed at MCH. “My anger was an issue, but I never lost my faith and that has played a big role in my life.”

Devin’s school performance improved at the charter school, and he is on the MCH football and basketball teams.

“I really enjoy being part of a team,” he said. “I find myself encouraging others when I see my teammates frustrated.

“Sports has helped me with my own frustration, but the football field is a great place to get that out,” Devin said with a smile. “The staff and coaches encourage me a lot and have helped me be a better team member.”

In the past three years, Devin has improved his relationships with his family.

“I am more open to following the rules and understand how structure at home is helpful,” he said. “My dad and I are closer. He really guides me and is open to listening to me.”

“I use the word inspirational to highlight his spiritual core,” Peniston said. “Devin had a lot of struggles, but it was easy to bring him back into focus when the conversation carried a spiritual tone.”

Today Devin said he is more confident and focused. He believes MCH staff have played a role in helping him make changes in his life, especially in relation to his faith.

“I read my Bible and pray for guidance daily,” Devin said.

“Devin has showed a great deal of growth and maturity since he arrived at MCH,” said Jeanna Odom, MCH case manager. “He has developed the skills needed to better self-regulate and recognize triggers which allow him to use those skills. Devin is an amazing young man and I expect awesome things from him.”

If his life was a book, Devin said the title would be A New Creation.

“I have been given a new beginning,” he said. “I appreciate the many opportunities MCH has offered me to grow.”