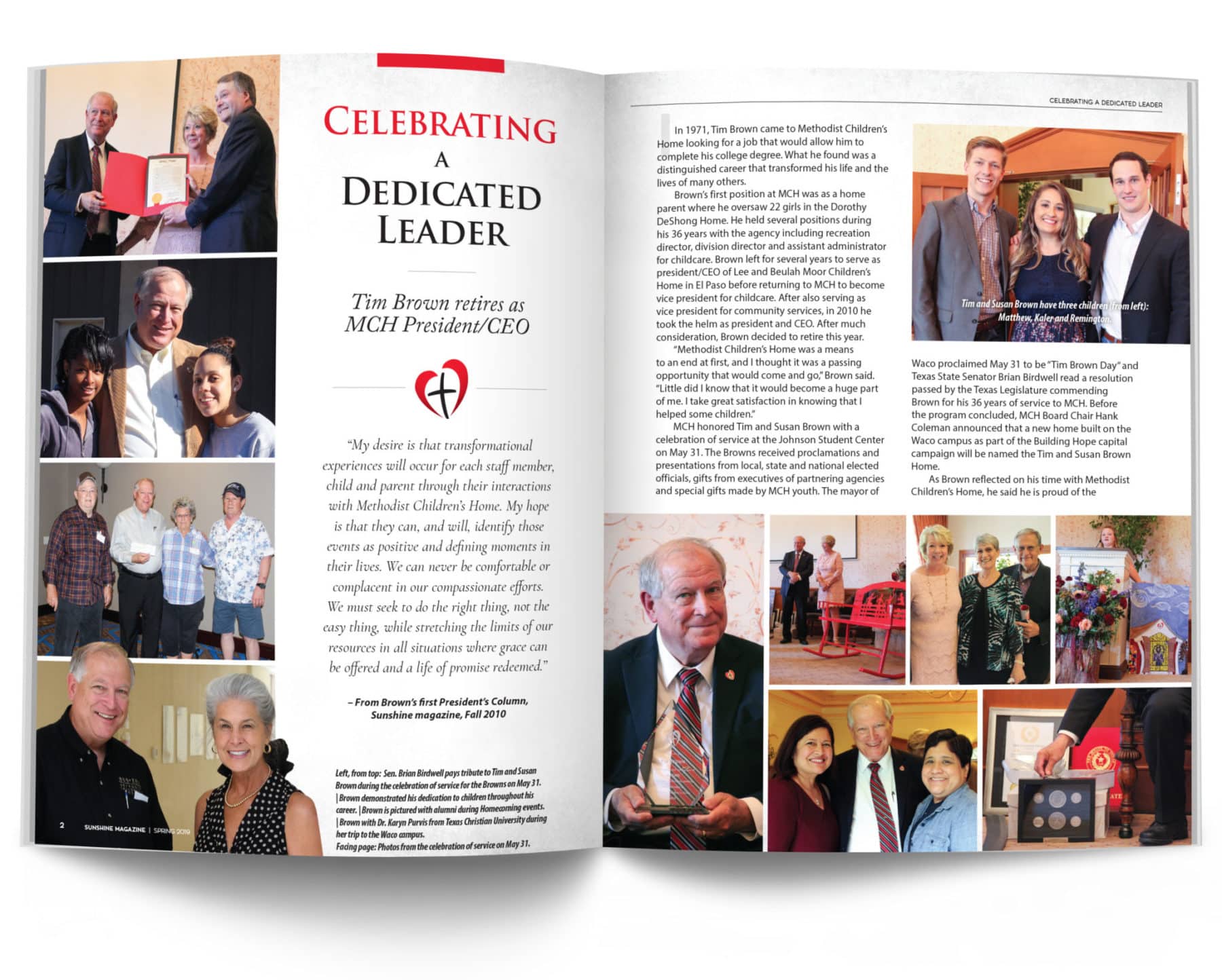 In 1971, Tim Brown came to Methodist Children’s Home looking for a job that would allow him to complete his college degree. What he found was a distinguished career that transformed his life and the lives of many others.

Brown’s first position at MCH was as a home parent where he oversaw 22 girls in the Dorothy DeShong Home. He held several positions during his 36 years with the agency including recreation director, division director and assistant administrator for childcare. Brown left for several years to serve as president/CEO of Lee and Beulah Moor Children’s Home in El Paso before returning to MCH to become vice president for childcare. After also serving as vice president for community services, in 2010 he took the helm as president and CEO. After much consideration, Brown decided to retire this year.

“Methodist Children’s Home was a means to an end at first, and I thought it was a passing opportunity that would come and go,” Brown said. “Little did I know that it would become a huge part of me. I take great satisfaction in knowing that I helped some children.”

MCH honored Tim and Susan Brown with a celebration of service at the Johnson Student Center on May 31. The Browns received proclamations and presentations from local, state and national elected officials, gifts from executives of partnering agencies and special gifts made by MCH youth. The mayor of Waco proclaimed May 31 to be “Tim Brown Day” and Texas State Senator Brian Birdwell read a resolution passed by the Texas Legislature commending Brown for his 36 years of service to MCH. Before the program concluded, MCH Board Chair Hank Coleman announced that a new home built on the Waco campus as part of the Building Hope capital campaign will be named the Tim and Susan Brown Home.

As Brown reflected on his time with Methodist Children’s Home, he said he is proud of the innovation that has been realized during his tenure at the 129-year-old ministry.

“When you talk about change at Methodist Children’s Home, it’s constant,” Brown said. “One thing I have thoroughly enjoyed at MCH is its propensity to continue to celebrate the past, and yet a willingness to change when times dictated that changes be made. I was part of that change. It was an awesome experience, it was a learning experience, and it was a feeling of satisfaction that we are doing the right things for kids.”

Brown provided leadership during several important achievements for the agency. One of the most notable is his leadership of a strategic planning process that resulted in important outcomes such as the implementation of evidence-based practices and trauma-informed care in residential and MCH Family Outreach programs. The strategic plan also led to the development of a master plan for 11 new residential homes on the historic Waco campus, with the first new home on the campus in five decades opening its doors in 2016. These homes incorporate a design that was a result of research gained through a partnership with the Karyn Purvis Institute of Child Development at Texas Christian University and recently earned the “Innovation Award” from the United Methodist Association of Health and Welfare Ministries.

During Brown’s tenure, MCH also earned national reaccreditation through the Council on Accreditation (COA) in 2010, 2014 and 2018. MCH is a national leader in the childcare field, and Brown is quick to give credit to the dedicated staff who work day in and day out to reach out and build relationships in order to make a positive impact on the children and families served.

“It takes a great bit of courage and tenacity to be a staff member,” Brown said. “The people that work here have difficult jobs every day. You don’t get a lot of credit and you don’t get a whole lot of thanks up front. I want to encourage the staff to stay the course, to continue to do what they do and continue to do it consistently because over time it makes a difference in the lives of our children and families.”

Brown said he has many fond memories of his time at MCH, such as the privilege of standing in for deceased or absent fathers for six brides – MCH alumni – on their wedding days. He also enjoyed witnessing young people who never thought they would earn a high school diploma walk the stage during graduation.

“Seeing kids change their perspective on life, being able to form friendships and reach out to others, go on mission trips and find the blessing that comes from giving rather than receiving, there’s just too many experiences to name,” Brown said. “But all of them are good.”

After he announced his retirement, Brown said he felt encouraged when several former residents reached out to him to express their gratitude.

“I can tell you that the best memories I have are from some of the most difficult kids that I worked with,” he said. “Those will probably sustain me in my old age when I’m sitting around rocking on the front porch wondering what to say or do with the rest of what I have left, and I wouldn’t trade it for anything.”

Brown is passionate about the mission of Methodist Children’s Home because he has witnessed miraculous transformations of children who came from difficult circumstances.

Brown’s desire to serve has reached beyond MCH as he has been a strong advocate of services to children in Waco and throughout the state. He is part of numerous local, state and national organizations including the board of the Texas Coalition of Homes for Children, Public Private Partnership with the Texas Department of Family and Protective Services, the Texas Alliance of Child and Family Services, and the McLennan County and Heart of Texas regional child fatality review teams. He plans to continue to advocate for children and MCH beyond his retirement.

On June 30, 2019, Brown’s tenure as president will come to a close; however, his influence, dedication, and honorable legacy will forever be part of MCH history.

“I hope one of the things I’m remembered for is my compassion,” Brown said. “I hope people will remember me for constantly striving to do the right thing and for being willing to take risks to try and find ways for everyone to be able to contribute, participate and build a team that works together for the good of all. My hope for Methodist Children’s Home is that it will continue to evolve and grow and that people will do even better things than we’ve done, and that kids will continue to get better.”