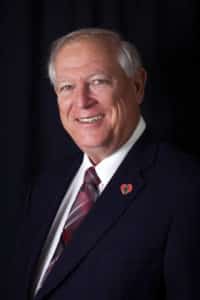 The Board of Directors of Methodist Children’s Home (MCH) today launched a national search for the next leader of the 129-year-old social service ministry as current President/CEO Tim Brown announced his plan to retire at the end of the fiscal year, June 30, 2019.

Brown has led the Waco-based childcare organization since 2010 but has served in a variety of roles with the agency for 36 years. MCH serves more than 5,000 individuals annually through residential programs for children ages 11-18 on the Waco campus and MCH Boys Ranch, transition living programs for alumni ages 18-26, and foster care and in-home services through 13 MCH Family Outreach offices across Texas and New Mexico.

“After much thought, prayer and discussion with my family and the Board of Directors in recent months, I have decided that the time is right to retire,” Brown said. “I share this news with a grateful heart, a sense of peace and the satisfaction of seeing so many young lives change for the better, families reunite, and staff members serve, flourish and grow professionally and personally.”

Hank Coleman, chair of the MCH Board of Directors, said the presidential search committee is led by Board member Bill Bingham, an Austin, Texas, attorney. Coleman expressed his appreciation for the way Brown has led the organization and said he has confidence in the search committee and the future of MCH.

“There is no denying the many accomplishments that have occurred under the leadership of Tim Brown,” Coleman said. “The Board of Directors marvels at how far this ministry has advanced during his tenure. His experience, expertise and advocacy for young people are amazing gifts he has given MCH for more than three decades.

“We expect many qualified applicants to seek this position and I am confident the right person will be selected who will build on our history of excellence in childcare and help us set the future vision for this ministry,” he said.

Brown announced his retirement to staff on Jan. 11, and emphasized his belief in the bright future of the organization.

“I was blessed to begin my career at MCH as a home parent, and I am equally blessed to be ending it as the 10th president of this ministry,” Brown said in his announcement. “I will be proud to leave MCH with confidence in our outstanding employees and Board of Directors, who are committed to the vision and goals in our strategic plan.

“It is my sincere desire that we continue to give God the glory for the success at MCH and build on the legacy of service established during the tenures of past presidents, most recently Dr. Jack Kyle Daniels and Mr. Bobby Gilliam,” he added. “Methodist Children’s Home is in a very healthy place and is poised for an even greater future as it fulfills its mission to offer hope to children, youth and families through a nurturing, Christian community.”

Brown led MCH in a strategic planning process that strengthened the agency’s position as a national leader in the childcare field. The goals of the strategic plan resulted in many important outcomes, including the implementation of evidence-based practices and trauma-informed care in residential and community-based programs.

The strategic plan also led to the development of a master plan for 11 new residential homes on the historic Waco campus. In 2016, MCH opened the first new home on the campus in five decades, and construction is being completed on the fourth and fifth homes. The state-of-the-art homes provide improved safety features and normalcy for youth through open living spaces and private bedroom and bathrooms. The new homes have drawn interest from childcare agencies throughout the United States.

Under Brown’s leadership, MCH earned national reaccreditation through the Council on Accreditation (COA) in 2014 and 2018. MCH also maintains a Gold Seal of Transparency from Guidestar, the world’s largest source of information on nonprofit organizations, while the nation’s top-respected charity watchdog organization, Charity Navigator, ranks MCH as a four-star charity, its highest designation.

Brown has been a strong advocate of services to children in Waco and throughout the state. He serves numerous local, state and national organizations including the board of the Texas Coalition of Homes for Children, Public Private Partnership with the Texas Department of Family and Protective Services (TDFPS), the Texas Alliance of Child and Family Services, and the McLennan County and Heart of Texas regional child fatality review teams. A resident of Crawford, Brown earned degrees from Baylor University and Tarleton State University. He and his wife, Susan, have three children – Remington, Kaler and Matthew.