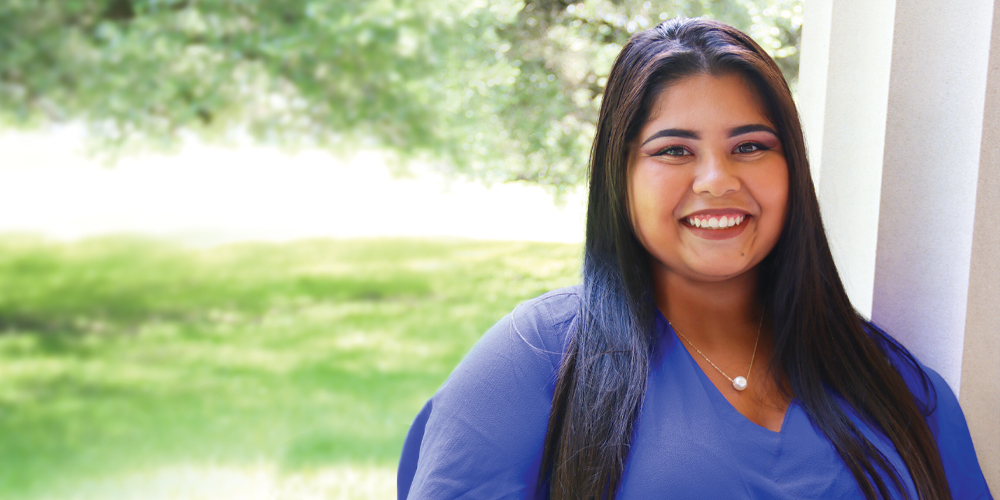 Vanessa is a bright young woman with a magnetic smile and infectious laugh. She admits she didn’t always share her big personality confidently. Her journey has been far from easy, but the 24-year-old is beginning to flourish as a young adult.

Her adoptive mother died when Vanessa was a teenager and she and her sister lived with their older sister’s family for a time. However, both fell behind in school and started hanging around the wrong crowd. In 2012, Vanessa’s older sister and uncle, who used to work for Methodist Children’s Home, encouraged the girls to move to the Waco campus.

“It was hard and I was so scared at first,” Vanessa admitted. “But I knew it was the right decision because I didn’t want my older sister to have the burden of also raising two teenage girls.”

It didn’t take long at MCH for Vanessa’s personality to shine as she developed close relationships with staff and other youth.

“MCH is family to me,” she said. “I learned the meaning of love, family and caring. MCH taught me that you don’t have to be related to someone in order for them to care deeply about your well-being and future.”

When she wasn’t singing in the choir or belting out the national anthem at MCH football and basketball games, Vanessa enjoyed working in the concession stand.

“Vanessa is one of those people I can trust without question,” Ondrey said. “She has experienced so much in life and is a beautiful person. She is putting in the work necessary to accomplish her goals. I know she’s keeping her eyes on the prize.”

That “prize” is a bachelor’s degree in special education, a passion developed through Vanessa’s relationship with her older brother, who has Down syndrome.

“My brother showed me so much love when we were growing up; everyone knows I’m his favorite,” Vanessa said proudly. “He’s smart, and everyone like him should have the right to learn. I believe I’ll make the perfect special education teacher.”

In high school, Vanessa learned how the Transition Services (TS) program equips MCH alumni with the skills and resources to reach educational and professional goals.
“That’s when I told myself I could do this,” Vanessa said. “The people in Transition Services have encouraged me the whole way.”

After graduating from the charter school on the Waco campus in 2016, Vanessa moved into an Independent Living home and eventually to Clay Commons, an apartment complex in Waco that is part of the MCH program. There Vanessa learned more about time management and other important life skills like budgeting and filing taxes. She later found her own apartment and earned an associate’s degree in fine arts from McLennan Community College (MCC) in May 2020.

“Those first couple of semesters were rough,” Vanessa admitted. “I know I would not have made it as far as I have without the support of Transition Services.”

Vanessa currently attends Tarleton State University through MCC’s University Center in Waco. She maintains a 4.0 GPA and is on the President’s List, the highest honor a student can earn. Vanessa plans to graduate in May 2022 with her bachelor’s degree in special education.

“She has worked so hard,” said Angie Vaughn, Vanessa’s TS case manager. “I have no doubt Vanessa will do just as well if she wants to pursue a master’s degree. That opportunity is there for her through MCH.”

Vanessa said MCH helped her in so many ways, and knows she is a stronger person.

“Through my experiences at MCH, I learned to respect myself and that I deserve to be respected,” Vanessa said. “I’m smart and I don’t need to second guess that.”
Vanessa keeps her eyes on the prize by focusing on her academics while also working at a restaurant in Waco where she has been employed since 2015. The memory of her mother and the love for her brother add to her motivation.

“When my mom adopted us, she welcomed us into her home,” Vanessa said. “She gave us her last name. She took care of us. I know she would be proud of me.

“My brother motivates me because he’s the reason for what I want to do,” she added. “Without him, I would not be working to make a difference in people’s lives. Graduating with my bachelor’s degree will be the first step. MCH changed so much for me and I want to be able to give back.”