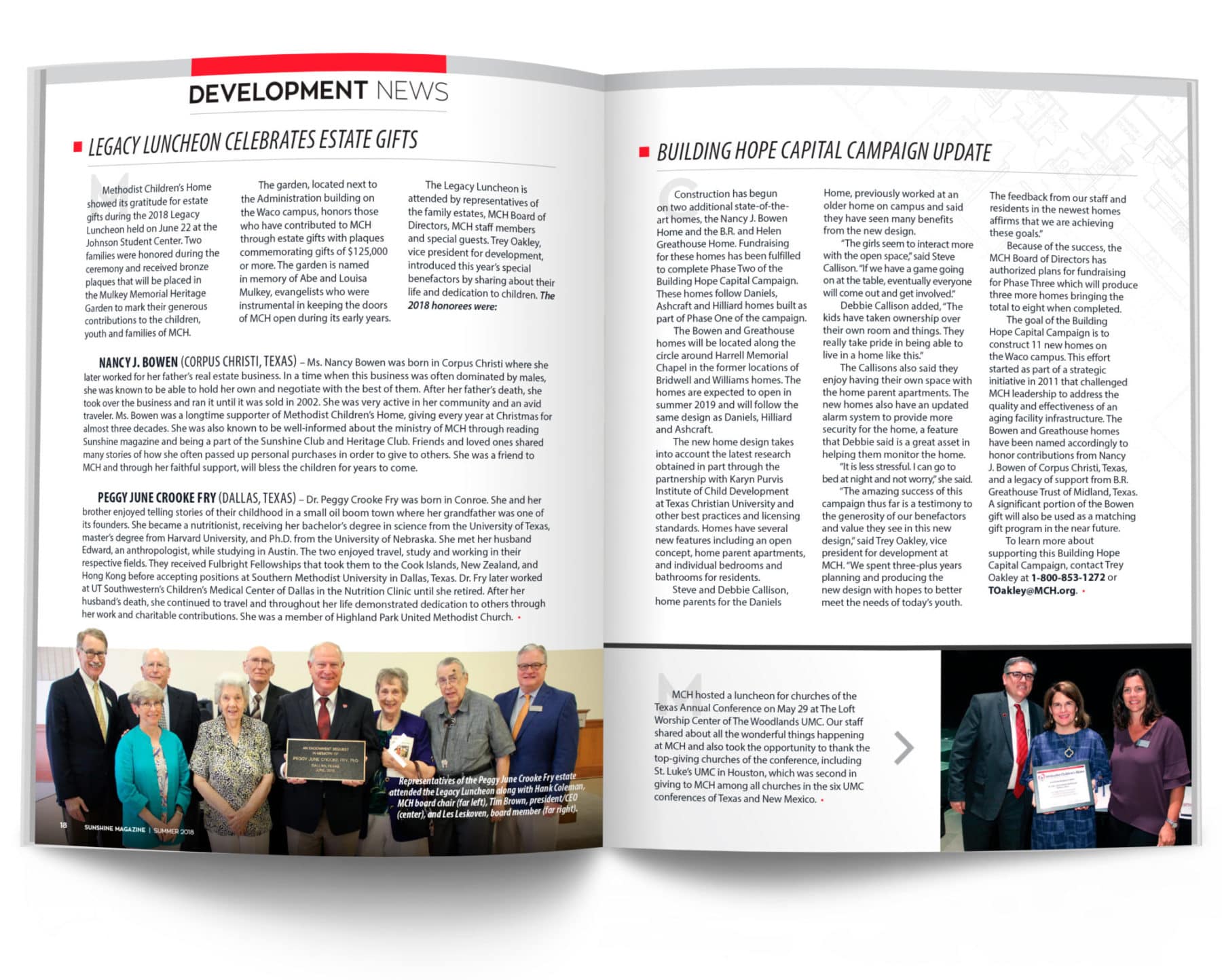 Methodist Children’s Home showed its gratitude for estate gifts during the 2018 Legacy Luncheon held on June 22 at the Johnson Student Center. Two families were honored during the ceremony and received bronze plaques that will be placed in the Mulkey Memorial Heritage Garden to mark their generous contributions to the children, youth and families of MCH.

The Legacy Luncheon is attended by representatives of the family estates, MCH Board of Directors, MCH staff members and special guests. Trey Oakley, vice president for development, introduced this year’s special benefactors by sharing about their life and dedication to children.

Ms. Nancy Bowen was born in Corpus Christi where she later worked for her father’s real estate business. In a time when this business was often dominated by males, she was known to be able to hold her own and negotiate with the best of them. After her father’s death, she took over the business and ran it until it was sold in 2002. She was very active in her community and an avid traveler. Ms. Bowen was a longtime supporter of Methodist Children’s Home, giving every year at Christmas for almost three decades. She was also known to be well-informed about the ministry of MCH through reading Sunshine magazine and being a part of the Sunshine Club and Heritage Club. Friends and loved ones shared many stories of how she often passed up personal purchases in order to give to others. She was a friend to MCH and through her faithful support, will bless the children for years to come.

Dr. Peggy Crooke Fry was born in Conroe. She and her brother enjoyed telling stories of their childhood in a small oil boom town where her grandfather was one of its founders. She became a nutritionist, receiving her bachelor’s degree in science from the University of Texas, master’s degree from Harvard University, and Ph.D. from the University of Nebraska. She met her husband Edward, an anthropologist, while studying in Austin. The two enjoyed travel, study and working in their respective fields. They received Fulbright Fellowships that took them to the Cook Islands, New Zealand, and Hong Kong before accepting positions at Southern Methodist University in Dallas, Texas. Dr. Fry later worked at UT Southwestern’s Children’s Medical Center of Dallas in the Nutrition Clinic until she retired. After her husband’s death, she continued to travel and throughout her life demonstrated dedication to others through her work and charitable contributions. She was a member of Highland Park United Methodist Church. •

Construction has begun on two additional state-of-the-art homes, the Nancy J. Bowen Home and the B.R. and Helen Greathouse Home. Fundraising for these homes has been fulfilled to complete Phase Two of the Building Hope Capital Campaign. These homes follow Daniels, Ashcraft and Hilliard homes built as part of Phase One of the campaign.

The Bowen and Greathouse homes will be located along the circle around Harrell Memorial Chapel in the former locations of Bridwell and Williams homes. The homes are expected to open in summer 2019 and will follow the same design as Daniels, Hilliard and Ashcraft.

The new home design takes into account the latest research obtained in part through the partnership with Karyn Purvis Institute of Child Development at Texas Christian University and other best practices and licensing standards. Homes have several new features including an open concept, home parent apartments, and individual bedrooms and bathrooms for residents.

Steve and Debbie Callison, home parents for the Daniels Home, previously worked at an older home on campus and said they have seen many benefits from the new design.

“The girls seem to interact more with the open space,” said Steve Callison. “If we have a game going on at the table, eventually everyone will come out and get involved.”

Debbie Callison added, “The kids have taken ownership over their own room and things. They really take pride in being able to live in a home like this.”

The Callisons also said they enjoy having their own space with the home parent apartments. The new homes also have an updated alarm system to provide more security for the home, a feature that Debbie said is a great asset in helping them monitor the home.

“It is less stressful. I can go to bed at night and not worry,” she said.

“The amazing success of this campaign thus far is a testimony to the generosity of our benefactors and value they see in this new design,” said Trey Oakley, vice president for development at MCH.

“We spent three-plus years planning and producing the new design with hopes to better meet the needs of today’s youth. The feedback from our staff and residents in the newest homes affirms that we are achieving these goals.”

Because of the success, the MCH Board of Directors has authorized plans for fundraising for Phase Three which will produce three more homes bringing the total to eight when completed.

The goal of the Building Hope Capital Campaign is to construct 11 new homes on the Waco campus. This effort started as part of a strategic initiative in 2011 that challenged MCH leadership to address the quality and effectiveness of an aging facility infrastructure. The Bowen and Greathouse homes have been named accordingly to honor contributions from Nancy J. Bowen of Corpus Christi, Texas, and a legacy of support from B.R. Greathouse Trust of Midland, Texas. A significant portion of the Bowen gift will also be used as a matching gift program in the near future.

To learn more about supporting this Building Hope Capital Campaign, contact Trey Oakley at 1-800-853-1272 or TOakley@MCH.org. •

MCH Hosts Luncheon for Churches of the Texas Annual Conference

MCH hosted a luncheon for churches of the Texas Annual Conference on May 29 at The Loft Worship Center of The Woodlands UMC. Our staff shared about all the wonderful things happening at MCH and also took the opportunity to thank the top-giving churches of the conference, including St. Luke’s UMC in Houston, which was second in giving to MCH among all churches in the six UMC conferences of Texas and New Mexico. • 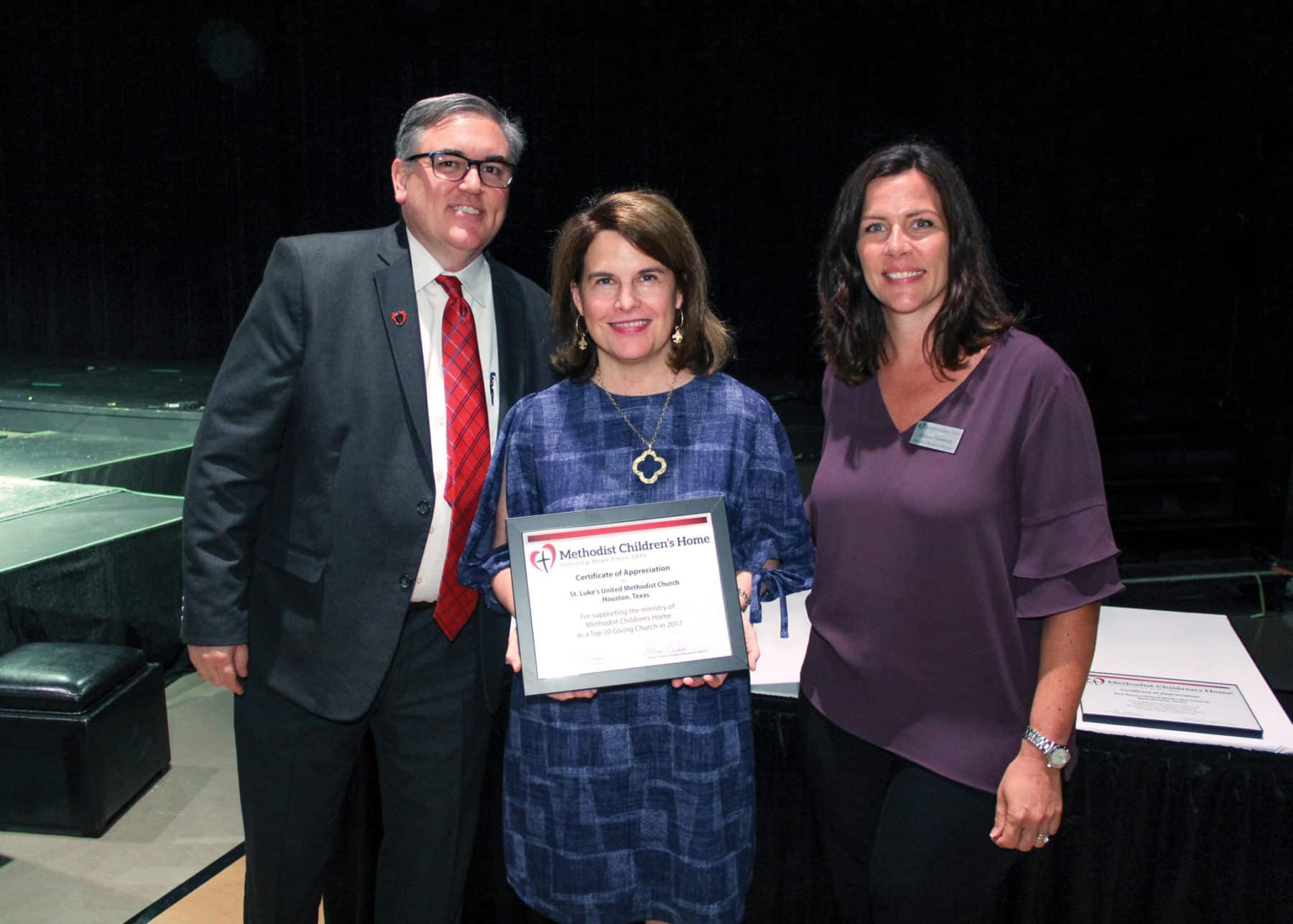