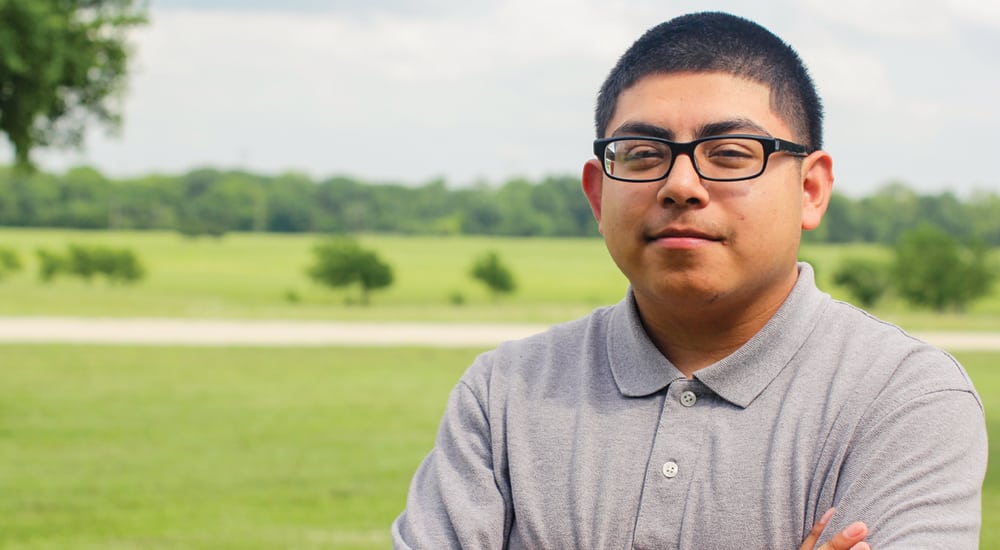 A little more than two years ago, Roger got a second chance to make his father proud.

He had gotten into some trouble that led him to juvenile detention. However, instead of giving him his sentence, the judge told Roger to turn around and look at his father, who was sitting behind him in the courtroom. The judge gave him a choice: go to prison for six months, or try something new by going to Methodist Children’s Home where he could build a new life.

“I had never seen him cry before and I thought, ‘OK, this is something I’ve got to try to do,” Roger said.

Roger came to the MCH Boys Ranch in October 2016. At first, he said he continued to act up and make bad choices, but soon decided he needed to change his ways. He began socializing with his peers and connecting with staff members. He realized the people at MCH cared about him and wanted to help him.

At the MCH charter school on the Waco campus he decided to enroll in the agricultural sciences classes where he learned to care for and show pigs and how to weld and create projects in the workshop. It was an experience that was totally new to him.

“I learned responsibility and how to use the equipment,” Roger said. “I think it taught me a little more about maturity, how to be responsible for what I’m working on.”

He said he also learned about hard work by seeing the example of his teachers and staff at the Boys Ranch. He now volunteers his time on the weekends to help out with feeding animals or finishing up projects in the shop when he is able.

Roger maintained an A and B average at the charter school and graduated in May. He also balanced his studies with a part-time job at a local restaurant. LaSonia King, Roger’s home life manager, said he has come a long way during his time at MCH.

“Roger has overcome many challenges while at MCH,” King said. “These challenges have inspired Roger to be the mature and motivated young man he is today. It’s been a joy to see him transform into a dependable, hardworking young adult. We are very proud of Roger’s achievements.”

Roger said he will continue to work and may attend Texas State Technical College to study carpentry or welding. He said he has been able to do more at MCH than he ever thought possible.

“Because of MCH I was able to get my first job and I’ve been able to keep it all this time, which to me is crazy because I never saw myself getting a job and doing something productive,” he said. “I never saw myself graduating and doing all this stuff I’ve been doing. The path I was going on was jail or even worse. I got a second chance to change and go down the right path.

“I think I’ve made my dad proud of the person that I’ve become.”