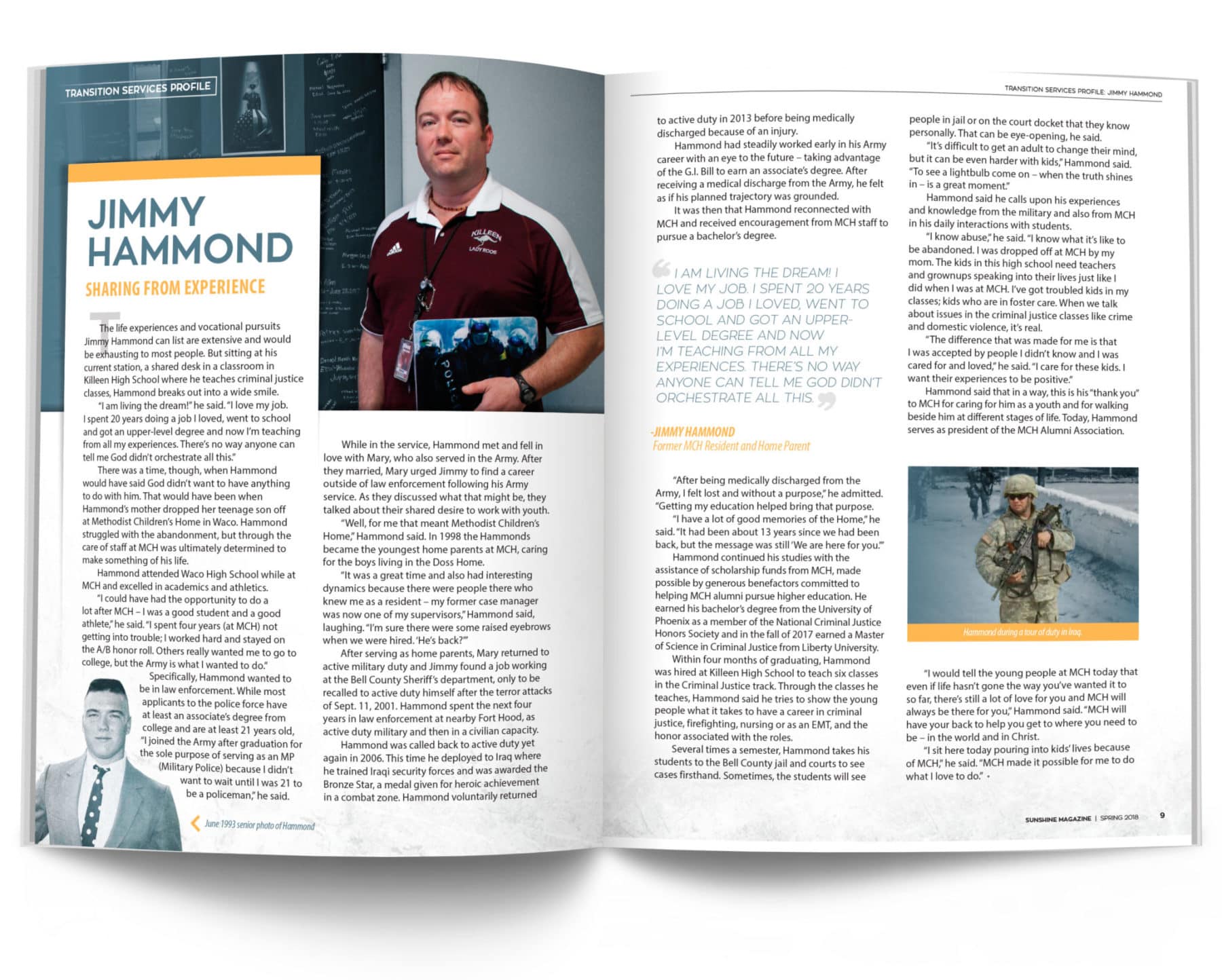 The life experiences and vocational pursuits Jimmy Hammond can list are extensive and would be exhausting to most people. But sitting at his current station, a shared desk in a classroom in Killeen High School where he teaches criminal justice classes, Hammond breaks out into a wide smile.

“I am living the dream!” he said. “I love my job. I spent 20 years doing a job I loved, went to school and got an upper-level degree and now I’m teaching from all my experiences. There’s no way anyone can tell me God didn’t orchestrate all this.”

There was a time, though, when Hammond would have said God didn’t want to have anything to do with him. That would have been when Hammond’s mother dropped her teenage son off at Methodist Children’s Home in Waco. Hammond struggled with the abandonment, but through the care of staff at MCH was ultimately determined to make something of his life.

Hammond attended Waco High School while at MCH and excelled in academics and athletics.

“I could have had the opportunity to do a lot after MCH – I was a good student and a good athlete,” he said. “I spent four years (at MCH) not getting into trouble; I worked hard and stayed on the A/B honor roll. Others really wanted me to go to college, but the Army is what I wanted to do.”

Specifically, Hammond wanted to be in law enforcement. While most applicants to the police force have at least an associate’s degree from college and are at least 21 years old, “I joined the Army after graduation for the sole purpose of serving as an MP (Military Police) because I didn’t want to wait until I was 21 to be a policeman,” he said.

While in the service, Hammond met and fell in love with Mary, who also served in the Army. After they married, Mary urged Jimmy to find a career outside of law enforcement following his Army service. As they discussed what that might be, they talked about their shared desire to work with youth.

“Well, for me that meant Methodist Children’s Home,” Hammond said. In 1998 the Hammonds became the youngest home parents at MCH, caring for the boys living in the Doss Home.

“It was a great time and also had interesting dynamics because there were people there who knew me as a resident – my former case manager was now one of my supervisors,” Hammond said, laughing. “I’m sure there were some raised eyebrows when we were hired. ‘He’s back?’”

After serving as home parents, Mary returned to active military duty and Jimmy found a job working at the Bell County Sheriff’s department, only to be recalled to active duty himself after the terror attacks of Sept. 11, 2001. Hammond spent the next four years in law enforcement at nearby Fort Hood, as active duty military and then in a civilian capacity.

Hammond was called back to active duty yet again in 2006. This time he deployed to Iraq where he trained Iraqi security forces and was awarded the Bronze Star, a medal given for heroic achievement in a combat zone. Hammond voluntarily returned to active duty in 2013 before being medically discharged because of an injury.

Hammond had steadily worked early in his Army career with an eye to the future – taking advantage of the G.I. Bill to earn an associate’s degree. After receiving a medical discharge from the Army, he felt as if his planned trajectory was grounded.

It was then that Hammond reconnected with MCH and received encouragement from MCH staff to pursue a bachelor’s degree.

“After being medically discharged from the Army, I felt lost and without a purpose,” he admitted. “Getting my education helped bring that purpose.

“I have a lot of good memories of the Home,” he said. “It had been about 13 years since we had been back, but the message was still ‘We are here for you.’”

Hammond continued his studies with the assistance of scholarship funds from MCH, made possible by generous benefactors committed to helping MCH alumni pursue higher education. He earned his bachelor’s degree from the University of Phoenix as a member of the National Criminal Justice Honors Society and in the fall of 2017 earned a Master of Science in Criminal Justice from Liberty University.

Within four months of graduating, Hammond was hired at Killeen High School to teach six classes in the Criminal Justice track. Through the classes he teaches, Hammond said he tries to show the young people what it takes to have a career in criminal justice, firefighting, nursing or as an EMT, and the honor associated with the roles. 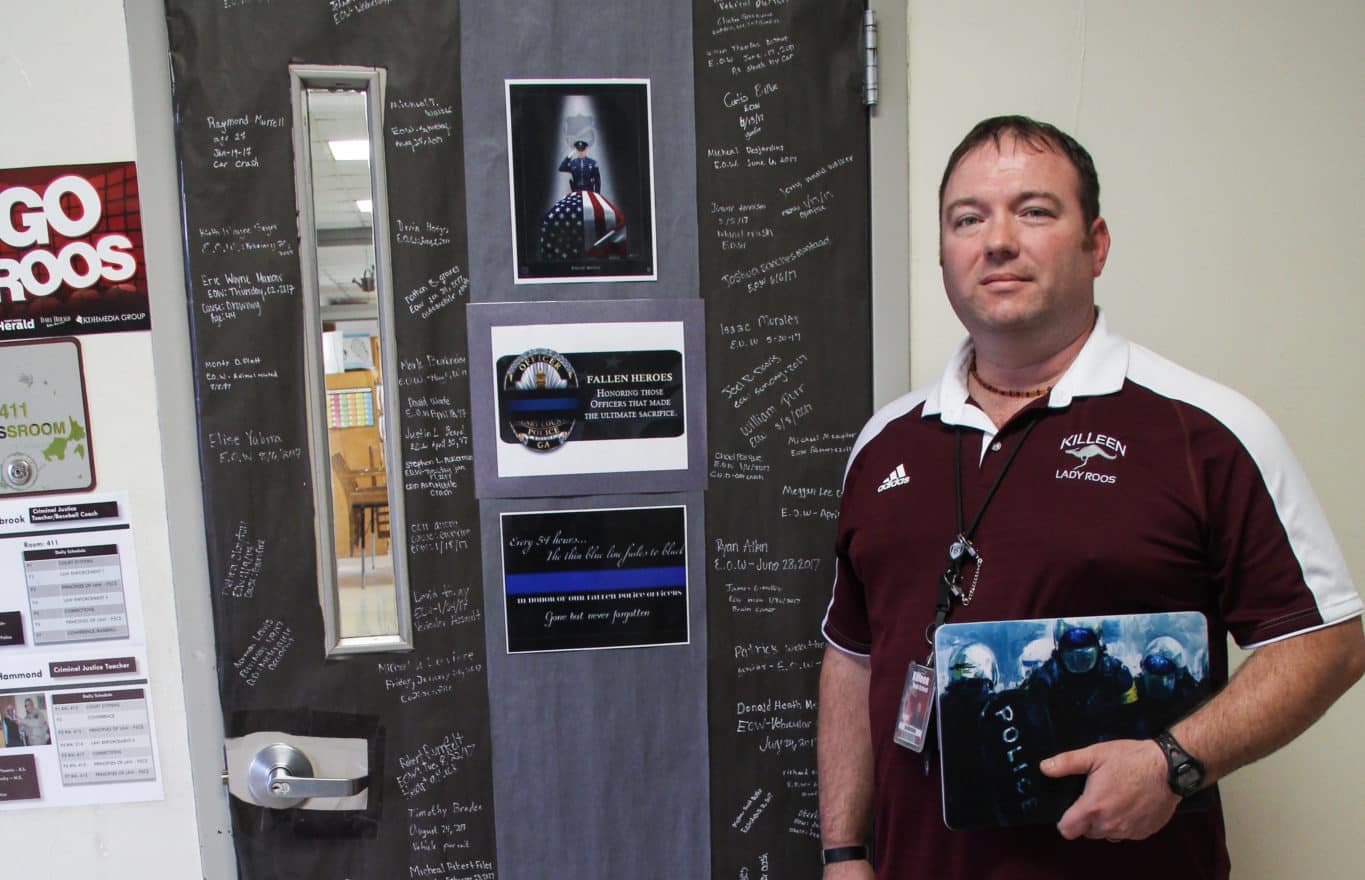 Several times a semester, Hammond takes his students to the Bell County jail and courts to see cases firsthand. Sometimes, the students will see people in jail or on the court docket that they know personally. That can be eye-opening, he said.

“It’s difficult to get an adult to change their mind, but it can be even harder with kids,” Hammond said. “To see a lightbulb come on – when the truth shines in – is a great moment.”

Hammond said he calls upon his experiences and knowledge from the military and also from MCH in his daily interactions with students.

“I know abuse,” he said. “I know what it’s like to be abandoned. I was dropped off at MCH by my mom. The kids in this high school need teachers and grownups speaking into their lives just like I did when I was at MCH. I’ve got troubled kids in my classes; kids who are in foster care. When we talk about issues in the criminal justice classes like crime and domestic violence, it’s real.

“The difference that was made for me is that I was accepted by people I didn’t know and I was cared for and loved,” he said. “I care for these kids. I want their experiences to be positive.”

Hammond said that in a way, this is his “thank you” to MCH for caring for him as a youth and for walking beside him at different stages of life. Today, Hammond serves as president of the MCH Alumni Association.

“I would tell the young people at MCH today that even if life hasn’t gone the way you’ve wanted it to so far, there’s still a lot of love for you and MCH will always be there for you,” Hammond said. “MCH will have your back to help you get to where you need to be – in the world and in Christ.

“I sit here today pouring into kids’ lives because of MCH,” he said. “MCH made it possible for me to do what I love to do.”